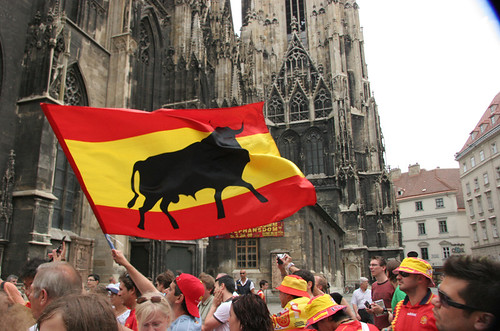 Real Madrid’s Iker Casillas is by most football critics accounts the best keeper in the world currently and if you disagree then you must at least admit that the guy is in the top three spots.  Another keeper often considered worthy of the top five in the world is Pepe Reina of Liverpool.  The backup and starter could start for just about any other squad in the entire world.  They are both that good and worthy of the billing best overall unit in the World Cup.

Barcelona’s key man in the middle, Puyol, is to no surprise also the key man in the middle for Spain’s national team.  Young budding star Sergio Ramos will join Puyol in the starting lineup and Marchena, Capdevila, Raul Albiol, and Pique will all be valuable members of the defensive unit this summer.  Probably not the best in the world here, but right up there.

Will Cesc Fabregas bounce back from that leg injury in time for the biggest stage this summer?  Not likely, but even without the young Gunners star the unit is still among the best in the world if not the best.  Barcelona’s superstar Iniesta will be joined by new formed league rival Xabi Alonso, and teammate Xavi in the starting unit.  Marcos Senna and Santi Cazorla are both solid backup players as well.  With Cesc this is an A + unit, but without the young superstar they slip a little bit in the grades.

One word for you World Cup fans.  Wowzers!  David Silva is one of the best secondary strikers/attacking midfielders in the game and the Valencia star will be in good company feeding the ball up top to David Villa, a league teammate and scoring machine.   Fernando Torres of Liverpool fame is truly considered one of the ten best players in the tournament and the young star will look to provide many goals for the three headed monster attack.

Overall Spain is the most talented team in the tournament on paper and their 35 game winning streak over the last three years was a phenonemal feat to say the least.  With the world’s best keeper tandem in Casillas and Reina and a strong defense that posesses many of the elite anchors in the world the defensive side of the pitch should hold up just fine.  And offensively no team in the world can match Spain’s outstanding staff that includes several major league superstars.  In fact Spain is ranked number one in the world and they truly do deserve the best grade of the tournament.  How is this grade?