Spain Is Feeling the Pain 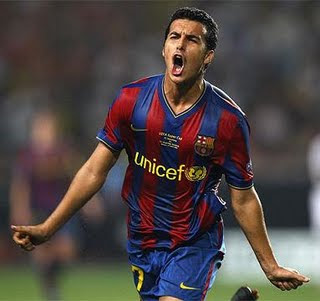 Left and right the superstar midfielders and wingers of La Furia Roja continue to go down to injury. Cesc Fabregas is continuing to nurse an ankle injury back to health with his Arsenal side, Xavi was ruled out of the upcoming two Euro 2012 qualifying matches with an injury of his own, and now another Barcelona’s footballer was significantly hurt in Pedro.

The Barca winger is being initially ruled out for three weeks with a severe muscle contusion in his left leg and tests earlier today confirmed the delay for the star. Pedro went down over the weekend against Mallorca with the injury and had to be replaced late in the 1-1 draw. The Spanish national team regular will miss a critical stretch of football action for both his club and his country.

Barcelona has several tough matches coming up including one when the league reopens up after the international break against first place Valencia. The winger also would be expected to miss a match against Real Zaragoza and would also likely miss the next Champions League action against FC Copenhagen. And that doesn’t even include the next two weeks of football coming up with critical national team matches against Lithuania and Scotland.

The World Cup champs will face the two joint first place squads in their Euro 2012 qualifying group and many Spanish stars are hampered with injury as I stated at the beginning of the article. Losing Pedro for the two match home and away stretch would mean that the club has one less viable option to use regarding their current roster.

The successful squad from this summer will continue their Euro 2012 campaign without several of their stars on Friday against  Lithuania in Salamanca and then they will travel to Glasgow to take on the Scots four days later.