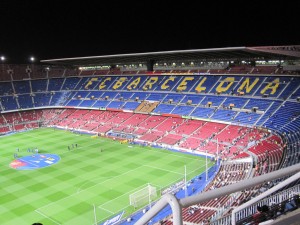 They are not calling it the end of an era, but Barcelona vice-president Josep Maria Bartomeu says that the team will be “shaken up” over the summer.

While Bartomeu did not talk about potential exits, but suggested that an overhaul of the squad was planned.

“We will make four or five signings,” he said. “We must shake up the squad. We will bring in players from Barca B. There are certain positions that need to be strengthened.”

According to various reports, Barcelona boss Tito Vilanova will have a transfer budget of around€50 million this summer, plus whatever he can raise from the sale of players like David Villa, Alexis Sanchez, Alex Song and perhaps even Cesc Fabregas.

Barcelona are expected to finally bring Neymar to the Camp Nou after this summer’s confederation cup, but scoring goals is not Barcelona’s problem. It’s their atrocious record in the transfer market over the last four seasons.

In 2011 they spent €53m on Cesc Fabregas and Alexis Sanchez. Fabregas doesn’t seem to be as highly regarded by Tito Vilanova as he was by Pep Guardiola and has struggled to break into the line-up. Sanchez has been a major disappointment and has been strongly linked with a move to Serie A this summer.

In 2010 Barcelona spent almost €64m on Javier Mascherano, David Villa, Adriano and Ibrahim Afellay. Afellay and Adriano have been disappointments, while David Villa has struggled the last 15 months since getting injured at the World Club Finals.

If you go back to 2009, Barca then spent almost €100m on Zlatan Ibrahimovic, Dmytro Chygrynskiy, Keirrison, and Maxwell. That was not a successful transfer period for Barcelona. Chygrynskiy is the only central defender Barca have bought over the last four years, even though Puyol keeps struggling with injuries. And Chygrynskiy lasted less than a year in Spain.

So over the last four seasons Barcelona have spent €246m on players and you can argue that only two of them, Javier Mascherano and Jordi Alba have been good buys.

That is a massive waste of money, and the results of those poor buys was exposed in Munich this week. You cannot continually fail to bring in quality players to refresh your squad and expect to compete with the best in Europe. Barcelona were able to do it because of the magic of Messi, Xavi and Iniesta. They are so good that they could paper over the cracks in the line-up. But that hasn’t been the case this season, and against the good teams Barcelona have been exposed time and time again.

It might be a little premature to call it an end of an era, as Messi, Xavi and Iniesta will all be back next season. But unless the signings Barcelona make this season can make an immediate impact next season, the gap between them and the other top teams in Europe will continue to widen.

Previous post: Mourinho And Casillas Split Not Getting Any Better